It started with a crazy idea hatched on a late night fatbike ride... I'm not even sure who had the idea first, but for at least two weeks now we've been talking about racing fatbikes at the Dakota Five-O, so with the race coming up this weekend, we had to decide... Were we in, or were we just talkin'?

And we both decided we were all in... So with that settled it's GAME ON! Even though there's no real fatbike "class", so we'll be racing against everyone else, we're cool with it. I'm not convinced it'll even be that much slower... Ask anyone who's ridden with me lately. But I also recognize the climbs outside Spearfish will be another matter.

That said, I've also mounted a BIG RING for the first time ever... I know how the finish plays out. 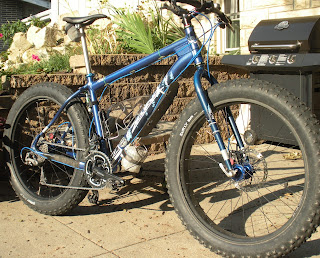 Good luck on the adventure. I have a hard enough time on my full suspension all mountain bike. You will probably still finish faster than I will.

Thanks guys... Ganzel, wish we were gonna see you up there!

Is the grill coming too? ;) I'm having too much fun on Elmer to bring the Giant.

Oh I'm sure we'll be grillin' every night... Fun is the #1 priority on this trip.